Note: Khan Academy has a helpful video about absolute and comparative + gains from trade

Let’s pretend that Mexico and Italy decide that they might be able to trade some of their products. Given their climate and natural resources, if Mexico put all its efforts to one type of product it could produce 5 tons of avocados or 2 tons of olive oil. If Italy put all its efforts into one product, it could produce 1 ton of avocados or 5 tons of olive oil. 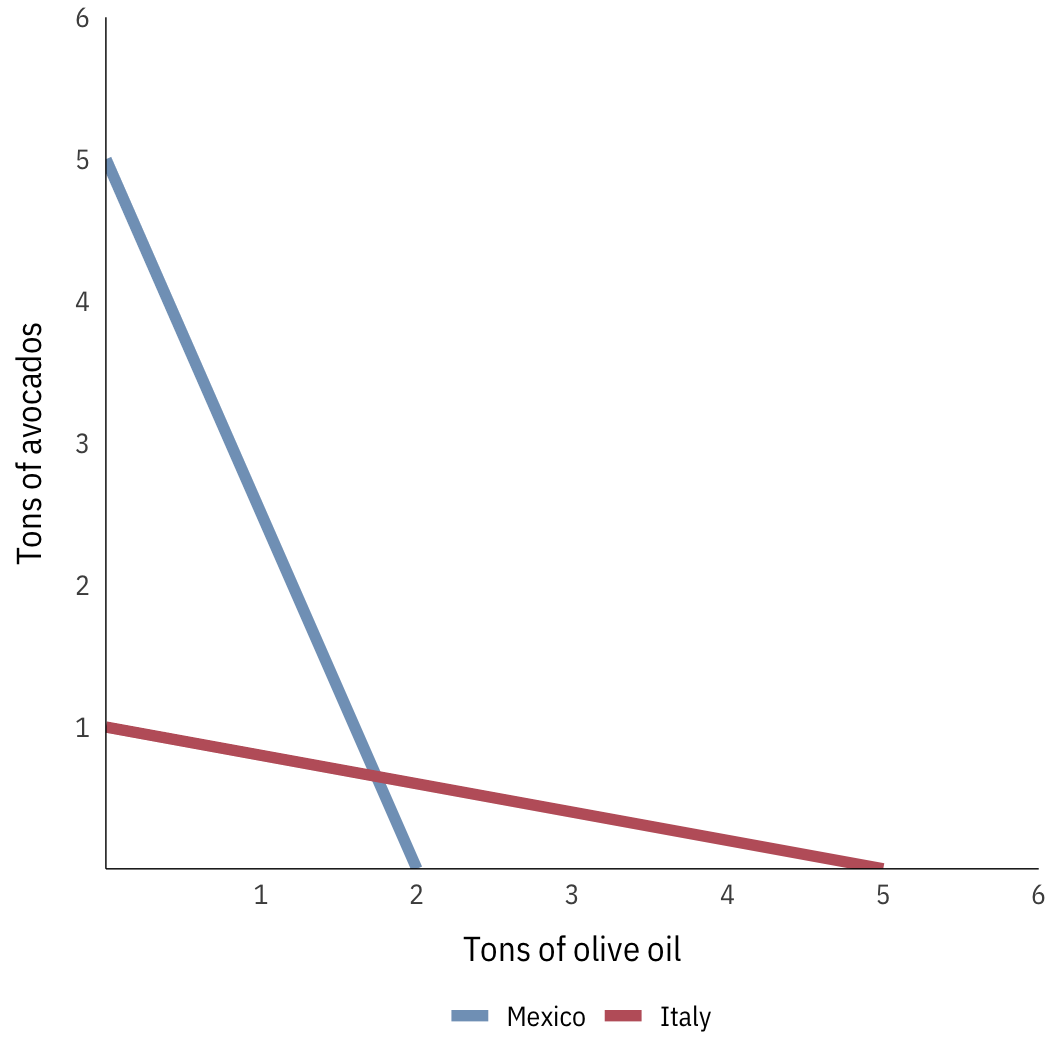 For Mexico to make one ton of olive oil, it would have to give up 2.5 tons of avocados, which is a lot. Italy, on the other hand, only has to give up 0.2 avocados to make a ton of olive oil, since they’re better at it. The country with the lowest opportunity cost has comparative advantage and should make the product—in this case, Italy should specialize in olive oil.

We can do the same thing for avocados: 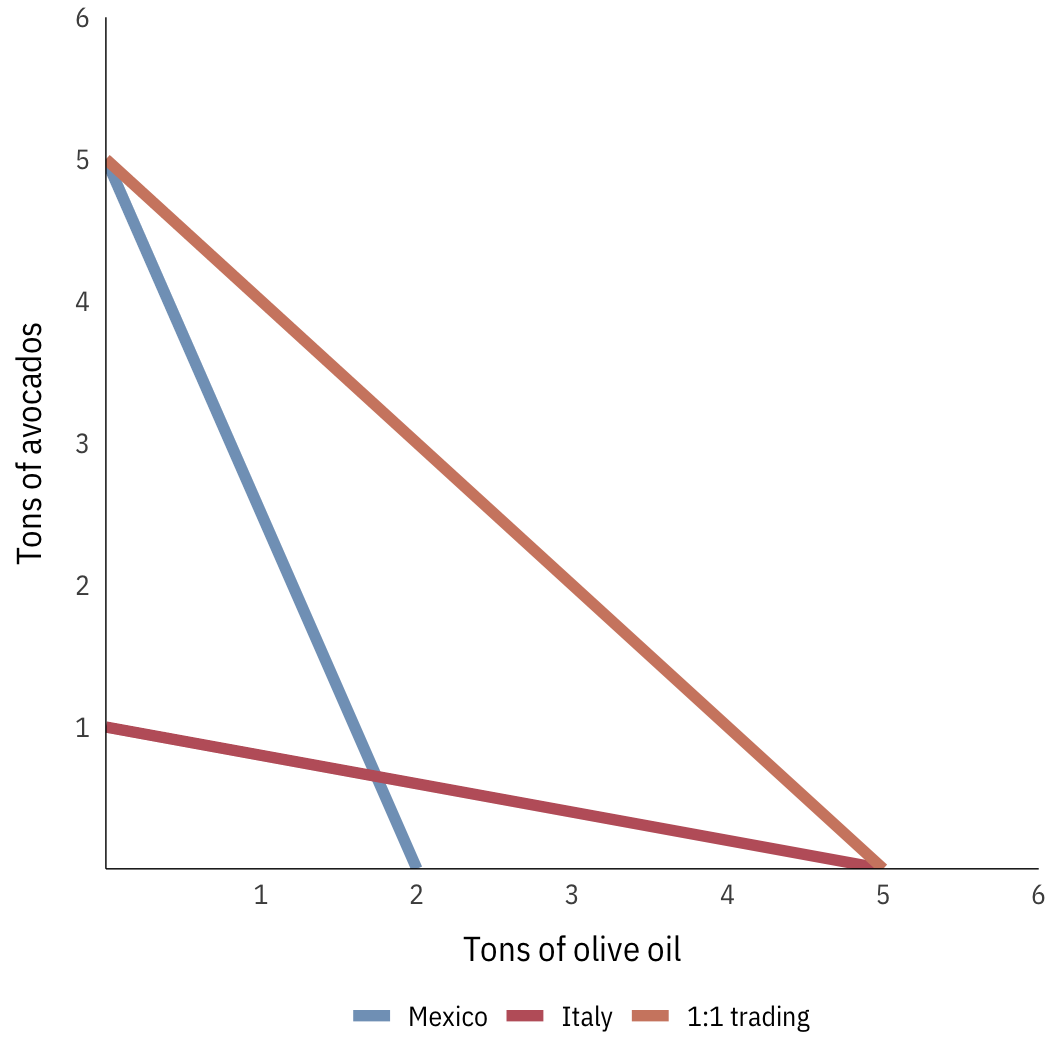 The price here can vary and depends on each party’s opportunity cost. If Italy can get avocados from Mexico for 1 ton of olive oil, that’s great for them! They’d ordinarily have to give up 5 tons of olive oil to get that same amount, so a 1:1 price is a really good deal. They’d be happy to trade with Mexico even if the price of avocados was 4 olive oils (or even 4.99). Once the price goes above their opportunity cost, though (like 6 tons of olive oil for 1 ton of avocados), it’s cheaper for them to produce avocados on their own than buy super expensive Mexican avocados.

Similarly, Mexico would be really happy with a 1:1 price ratio of avocados to olive oil, since they’d normally have to give up 2.5 avocados to get 1 ton of olive oil. If the price was 2 (or even 2.49) they’d still be happy. Once the price goes above 2.5, though, it’s cheaper for them to make olive oil on their own instead of buying it from Italy.

Comparative advantage when one party has absolute advantage in both products

Because the decision to trade is based on comparative and not absolute advantage, there can still be gains in trade even if one party has no absolute advantage in either product. For instance, suppose Mexico can trade with Costa Rica, which doesn’t have as large of an agricultural sector and can only produce 3 tons of avocados and 1 ton of olive oil: 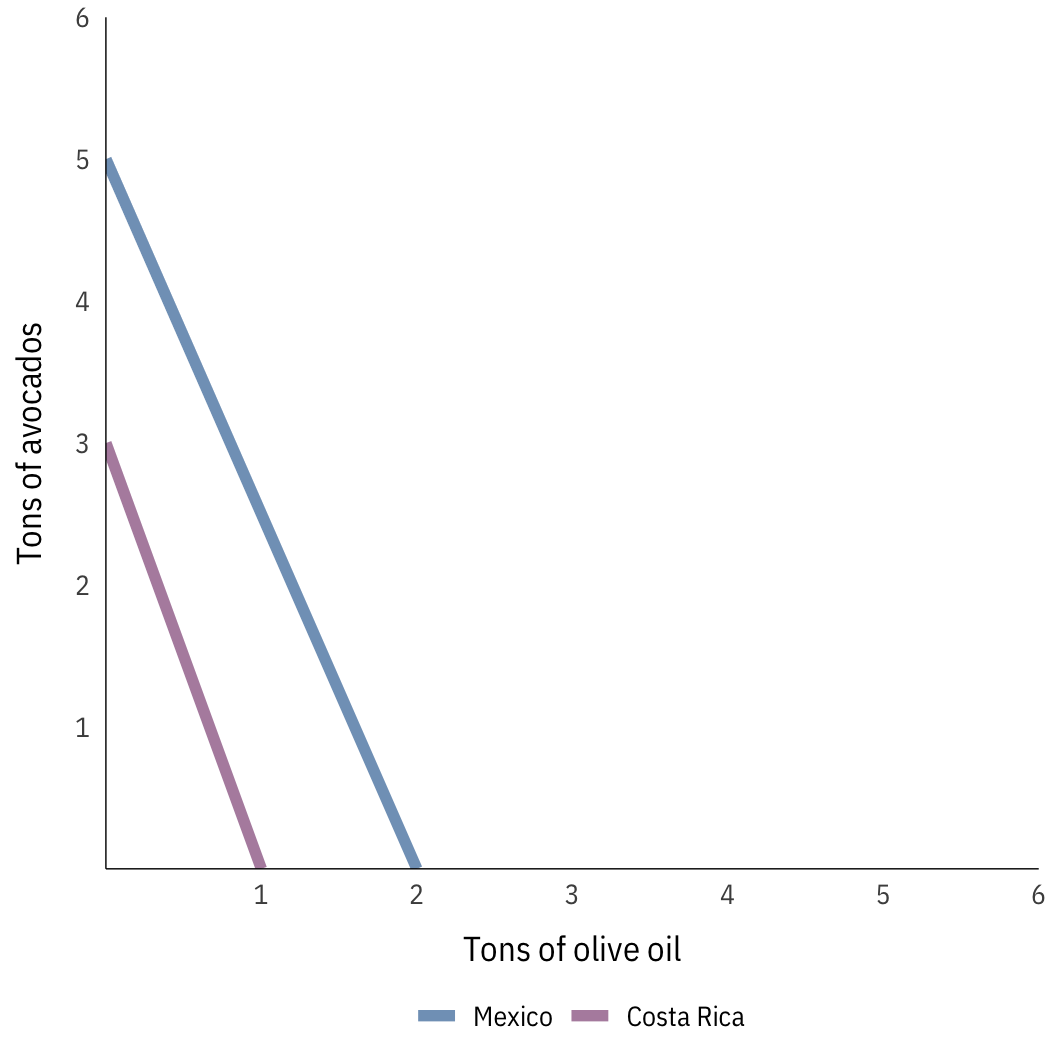 In this case, Mexico has absolute advantage in both avocados and olive oil. However, we should check each country’s opportunity cost for making each product:

What about avocado production?